DAUGHTERS OF THE AMERICAN REVOLUTION

On May 7, 2009, the D. C. DAR held a Gala Dinner and Silent Auction in the 19th Century Ballroom of Historic Gadsby’s Tavern in Alexandria, Virginia.

State Regent Priscilla Baker presented the DAR Medal of Honor to Lieutenant Andrew Baldwin, a distinguished U. S. Naval Officer, ironman triathlete, humanitarian, and physician. He is best known to the American television audience as the bachelor of the tenth season of the reality dating show “The Bachelor.”

The award was recommended jointly by members of the DAR in Arizona and the District of Columbia and approved by the President-General of the National Society Daughters of the American Revolution. The award is given to an American citizen who has displayed extraordinary leadership, patriotism and humanitarianism is his/her personal and professional endeavors.

Baldwin was awarded Humanitarian of the Year by Competitor Magazine at the Competitor Sports Awards, named one of Washington DC’s Most Influential People under 40 in 2009, and was listed as one of People Magazine’s hottest bachelors in 2008.

The speaker for the evening was Joan Brierton, Past Trustee and Vice President of the D. C. Preservation League and Senior Historic Preservation Specialist with the U. S. General Services Administration Center for Historic Buildings.

The Daughters of the American Revolution (DAR), founded in 1890 and headquartered in Washington, D.C., is a non-profit, non-political volunteer women’s service organization dedicated to promoting patriotism, preserving American history, and securing America’s future through better education for children. DAR members volunteer more than 60,000 hours annually to veteran patients, award over $150,000 in scholarships and financial aid each year to students, and support schools for the underprivileged with annual donations exceeding one million dollars. 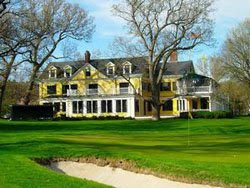 
Back in 1913, a twenty-year old former caddie and amateur golfer, Francis Ouimette, stunned audiences when he won the U.S. Open against superstar golfer Harry Vardon. He did this at a legendary country club in Brookline, Massachusetts, outside of Boston, that just happened to double as Ouimette's backyard.

Called simply The Country Club or TCC, this former equestian club and racetrack was established in 1882. Horseback riding and other outdoor activities brought wealthy men together for some quality time away from the big city and created the first "country" club.

In 1893, a new game from Scotland was introduced. The act of hitting wooden clubs against a small ball across a green and into a hole peaked interest in the United States and it seemed that The Country Club was a natural candidate for conversion to a golf course. Not welcome by all members, those looking to take up the sport had to fight those betting on the horse races nearby.

Initially, an unsophisticated six holes were landscaped and Willie Campbell, a pro from Scotland was hired to manage the links. The Country Club continued to buy parcels of land and Campbell helped to grow the course to a full 18 holes by 1899.

Over these eight years golf exploded in the United States and as early as 1894, tournaments were organized and the first official open was held in Newport, Rhode Island in 1895. The golfers played thirty-six holes in one day--proving the need for a great deal of stamina with the sport. Ironically, Horace Rawlings from England won and put golf on the map in New England.


As the game grew, so did the need for good equipment. Clubs were redesigned by course pros like Willie Campbell and balls were made to travel faster. Even Harry Vardon contributed with a new ball. TCC's golf membership grew and between 1902 and 1908 three new holes were added.

Four clubs joined Brookline to form the United States Golf Association. They hoped to pool their resources and each sponsor a major amateur tournament. The other four clubs were Newport Country Club, Andrews Club in Yonkers, NY., the Chicago Country Club and Shinnecock Hills in Long Island. They also created the official rules of the game. Theodore Havermayer was elected president of the USGA. In 1902, the first woman's amateur championship was held.

TCC had its turn at hosting the U.S. Open in 1913. By this time, golf had solid footing on a global level. Harry Vardon, the Tiger Woods of his day, and the inventor of the grip used by most golfers today, had been touring the U.S., showcasing clubs and helping stores like Jordan Marsh sell out of their stock in record time. Vardon won the 1900 U.S. Open and had taken the British Open Championship four times before contrating tuberculosis.

Francis Ouimette played against Vardon in 1913 and the tournament, a nail-biter to say the least, showed how golf was for everyone, even former caddies, even for boys from the wrong side of the country club lawns. To further the legend, Ouimette used as his caddie, ten-year-old Eddie Lowery. Adding poignancy to the win, the Ouimette family home was opposite the 17th hole. Young Francis had stared out his bedroom window for years and knew that hole like the back of his hand. His win at the U.S. Open; his win at this particular course summed up his dream.

Ouimette's victory had a direct bearing on the sport tripling in numbers. Everyone knew they too could learn to play and that money didn't influence the outcome of the game. The U.S. Open was played in Brookline in 1963 and 1988, on the 50th and 75th anniversaries of Francis Ouimette's stunning win.

In 1927, another nine holes were added. Designed by William Flynn, one of the most creative course architects of his day. Eight major amateur tournaments have been played at the course since 1913 along with a handful of other tournaments.

With the Massachusetts Amateur Tournament being played at TCC in July 2009, another dream will come true on the course at Brookline, perhaps even the chance to become another Francis Ouimette or Tiger Woods.

Sources:
Wikipedia--http://en.wikipedia.org/wiki/The_Country_Club
The Country Club Homepage--http://www.tcclub.org/
Posted by Editor at 9:12 PM No comments:

We all have a desire, no matter how small, to lose ourselves in the past. Through luminaries like George Washington, Amelia Earhart and Jim Lovell and events like the Women's Rights Convention at Seneca Falls, NY, the signing of the Declaration of Independence, and the fight along the Peninsula during the Civil War, we entice our imaginations, and connect with a piece of ourselves.

Traveling Through History is a reader's blog and a writer's blog! In it, you will read articles about things like the Historic Colleges of New England, taking a trip to historic Frederick, Maryland and other travel articles, Hannah Rantoul and her fight to start the U.S. Sanitary Commission, the Faces of Gettysburg, and the first soldier buried at Arlington National Cemetery. Our readers will comment, connect, and contribute with relevant pieces of their own. We will include interviews, book reviews, photo essays and more!

As always, we welcome your story ideas, press releases and suggestions. I know you will enjoy your journey as much as will!