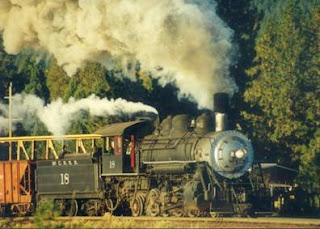 For the first time in more than 70 years, a magnificent steam train will make its way between Carson City and Virginia City on the historic Virginia & Truckee Railroad (http://www.vtrailway.org/), Saturday and Sunday, Aug. 15-16, 2009. The rumble of wheels – steel on steel, the melodic tempo of a train highballing down the track, the steam whistle cutting through the air – all signal the near completion of a project 17 years in the making.

An inaugural run features a ceremonial ride for VIPs, dignitaries and politicians along a 12.8-mile reconstructed portion of the 16.7-mile original route between Nevada’s sister cities, Friday, Aug. 14.

Beginning Saturday, August 15 and Sunday, August 16 and every consecutive Saturday through Oct. 31, the public can ride the rails. Trains leave Carson City from Eastgate Siding on Flint Drive at 10 a.m. arriving in Virginia City at 11:30 a.m. Then depart the F Street station in Virginia City at 3:30 p.m. to return to Carson City at 4:30 p.m. Roundtrip tickets are $48 per adult, $36 for children 12 and under and $40 for seniors over 65. One way tickets will be available for $29 adults, $23 for children and $25 for seniors. To reserve tickets, call 800-NEVADA-1 or visit https://www.dynamicticketsolutions.com/cccvb/.

The 60-90-minute train rides will include scenic vistas of the “old west” countryside, views of the Carson River, two tunnels and occasional sightings of wild stallions. Commemorative plaques with slices of historic track will be available to riders for $20 during the opening weekend with proceeds benefitting the Nevada Commission for the Reconstruction of the V&T Railway.

The V&T Railway, the richest short-line in American history, originally operated during the raucous silver strike era of the infamous Comstock Lode from 1869 to 1938. When completed in 2011, the reconstructed track traces all 16.7 miles of the 19th century route between Carson City and Virginia City and is expected to serve as a major tourism attraction to the area. Train rides will be packaged with lodging stays and award-winning restaurants to link the area’s fabled past to the present and shape its promising future as a prominent vacation destination. The Carson City Convention & Visitors Bureau and Carson City have pledged $21 million and Storey County has contributed $2 million to the $54.9 million project.

The 1860’s V&T was privately funded and featured the finest appointments with the most luxurious interiors money could buy, including gold-leaf and brass-adorned locomotives to wooden coaches. The line brought entrepreneurs, gamblers and aristocrats to the Comstock. Along with these characters, the train carried the Mother Lode’s gold and silver to Carson City and lumber from Lake Tahoe to build the mines in Virginia City.

The timing of the V&T route re-opening appropriately coincides with Railfest, an annual celebration of the V& T Railway observed that weekend in both cities with a plethora of railroad activities.

In addition to the V&T’s newly re-opened route, steam engines in both towns will also offer shorter rides along existing track. In Virginia City where the V&T has run for more than 30 years under the ownership of the Gray family, the popular 5-mile route to Gold Hill will also be in full operation. In Carson City, “steam-ups” will take visitors along the 1-mile route that surrounds the Nevada State Railroad Museum, adjacent to Highway 50 downtown.

Silver Line Express tickets, a city pass for savings on train and trolley rides, merchant discounts and local attractions around Virginia City and Gold Hill, are available at visitors center, 86 South C St. Various options are available, including trolley tours, admission to the Ponderosa Mine, Historic Radio Museum, the Mark Twain Museum at the Territorial Enterprise, The Way It Was Museum, the Fourth Ward School, Chollar Mine and Comstock Gold Mill. A 1914 Pullman car and a Railway President’s 1907 gentlemen’s car will be on display. Other activities include historic railroad memorabilia displays, free face painting, a balloon magician, bounce house, and children’s games. Call 775-847-4386 or visit http://www.visitvirginiacitynv.com/.

As part of Railfest weekend in Carson City, the Nevada State Railroad Museum will feature live music at the Depot. In conjunction with KNPB-TV and the Carson City Arts & Culture Coalition, the museum will screen The National Parks: America’s Best Idea, a film by award-winning director Ken Burns, outdoors on the side of the Jacobsen Interpretive Center at the museum at 8:30 p.m. Saturday night. Call 775-687-6953 or visit http://www.visitcarsoncity.com/. Allll aboard!
Posted by Editor at 3:59 PM No comments:

Just 90 miles East of Chicago, near the University of Notre Dame, State Theatre sits as a true landmark in the heart of Downtown South Bend, Indiana. Since opening its doors in 1921 as the Blackstone Theatre Vaudeville House, it has had an amazing 88-year history.

Listed on the National Historic Register of Places in 1985, it was once host to former President Ronald Reagan for the premier of "Knute Rockne All American" and the scene of infamous gangster John Dillinger’s last bank robbery. This unique, historic landmark is being sold in an online auction with bidding set to begin on July 16.
And now you can own this piece of American History.

The property is currently owned by Way of Life, a non-profit group. Proceeds from the building’s sale will help continue the organization’s mission of providing hope to the Community. “When the recession hit last fall, non-profits were hit the hardest. In these economic times, people have less money to donate, so we had some difficult decisions to make regarding our organization’s assets," said Lester L. Sumrall, President and Founder of Way of Life.

The two-week long auction will end on July 30 and is being conducted by commercial real estate broker, NAI Global, based in Albuquerque, NM. Ironically, the auction coincides with the release of the film “Public Enemies”, starring Johnny Depp. The movie, which profiles Dillinger, has generated a resurgence of interest in the gangster’s legacy.

On June 30, 1934 John Dillinger’s last robbery at Merchants Bank took place across the street from the theater. The incident netted Dillinger’s gang almost $30,000, leaving eight wounded and one police officer dead. Recounting the details of the incident, Sumrall said “They grabbed hostages and shot over 100 shots down the street as they were escaping. During this gunfight with police they shot up our facade and marquee.”

The landmark property has already received considerable interest from both corporate and private buyers due to its versatility and location near the College Football Hall of Fame.

“We’ve been pleased by all of the positive response we’ve gotten from the Chicago-Sun Times article, the NBC Chicago coverage and now the Fox News story,” Sumrall said. "The State Theatre is sure to become a valuable asset to its new owners ... There's a lot of big things that can happen here, and I believe they will."

For more information on the auction, please visit statetheatreauction.com for full details.
Posted by Editor at 12:28 PM No comments:

Travel discounts are available on accommodations for recreational vehicles and tourists including a wonderful choice of very historic and sometimes haunted bed and breakfasts, camping, white water rafting, caving, bike and horseback riding, a local gem mine, a day at the spa, planetarium shows, barge and carriage rides, area museums and exhibits, visits to local water parks, skiing, seeing a live play, or a concert, casual and fine dining, with more on the way. Packages featuring a wide variety of area attractions to include both day and night time activities offer visitors something to keep you and your travel companions enchanted and entertained during their stay... Rates vary according to the number in your party and advance reservations are required. We accept Visa, Mastercard, and Discover. We tend to stay busy throughout the year so please call when you have a convenient moment with your date, or dates... Now offering so many ways to save and make the most of your visit to the Southern Appalachian Mountains, Appalachian GhostWalks invites you and that special someone, or group to join them in saying, "Tennessee Sounds Good To Me"! Visit them online at www.AppalachianGhostWalks.com for additional information, or for a SPOOK-tacular good time please call (423) 743-WALK (9255) for reservations...

Very truly and hauntingly yours...