Four members of the U.S. Navy will be immortalized on stamps: William S. Sims, Arleigh A. Burke, John McCloy and Doris Miller. The First-Day-of-Issue dedication ceremony for the four 44-cent First-Class collectible "Distinguished Sailors" stamps takes place in Washington, DC, Feb. 4, 2010 at 10:30 a.m. in the Arleigh and Roberta Burke Theater of the United States Navy Memorial www.navymemorial.org at 701 Pennsylvania Ave., N.W. The event is free and open to the public. 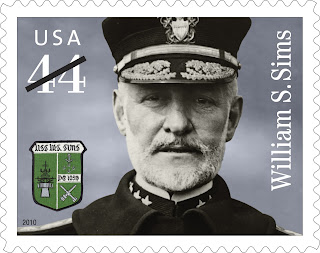 WILLIAM S. SIMS
Commander of U.S. naval forces in European waters during World War I, William S. Sims (1858-1936) was an outspoken reformer and innovator who helped shape the Navy into a modern fighting force.
Sims was born in Port Hope, Ontario, Canada, where his father, an American citizen, was a railroad engineer. The family moved to Vermont when Sims was about twelve and soon thereafter settled in Pennsylvania.
Sims attended the Naval Academy from 1876 to 1880. He then spent nearly two decades at sea, interrupted by a year (1889) in Paris studying French. From 1897 to 1900, he served as naval attaché to the U.S. embassy in France and to the ministry in Russia. During this time, he studied and made reports on European naval developments, which he found to be far more advanced than those in America. (While in France, he met his future wife, Anne Hitchcock, daughter of the U.S. Minister to Russia.)
In 1901, at great risk to his career, Sims circumvented his immediate superiors and wrote directly to President Theodore Roosevelt about “the extreme danger of the present very inefficient condition of the Navy,” emphasizing the glaring deficiencies of American battleships and the need for more accurate firepower. Roosevelt thanked Sims for the letter and encouraged him to continue offering suggestions. Sims was able to implement some of his ideas for reform, especially in the area of gunnery, while serving as inspector of target practice in the Navy’s Bureau of Navigation from 1902 to 1909. He trained officers and gun crews in a new gun control method called “continuous aim firing,” adapting the techniques of British officer Percy Scott and achieving significant improvements in firing speed and accuracy. He also served as President Roosevelt’s naval aide from 1907 to 1909.
Shortly before the United States entered World War I, Sims, by this time a rear admiral, was sent on a secret mission to gather information on wartime conditions and to confer with the British Royal Navy. Soon after America entered the war, he was appointed commander of U.S. naval forces operating near Europe. To counter the German strategy of unrestricted warfare by U-boats, Sims advocated various antisubmarine measures. He played a critical role in promoting and coordinating a system of convoys—using destroyers and other warships to escort merchant ships and transports through danger zones—that achieved dramatic reductions in Allied shipping losses. To the extent that the defeat of German submarine warfare was “the critical naval campaign of the war, essential to victory over the Central Powers,” as historian David Trask has written, Sims’s contribution to the Allied victory in World War I was profound.
After the war, Sims returned to the same position he had held previously at the Naval War College, serving as president until his retirement in 1922. He sparked a congressional investigation in 1920 of the wartime conduct of the Navy Department, leading to extensive hearings on the subject. He also wrote a Pulitzer Prize-winning book about the war, Victory at Sea (1920).
Sims continued to write and lecture about naval reform until his death in 1936, at which time the New York Herald Tribune declared that he had “influenced our naval course more than any man who ever wore the uniform.” The Navy has named three destroyers after Sims. The most recent, USS W. S. Sims (DE-1059), was commissioned in 1970 and was decommissioned in 1991. 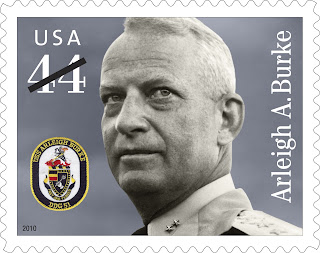 ARLEIGH A. BURKE
After serving as one of the top destroyer squadron commanders of World War II, Arleigh A. Burke (1901-1996) had an equally distinguished postwar career in which he played a major role in modernizing the Navy and guiding its response to the Cold War.
Born and raised on a farm near Boulder, Colorado, Burke secured an appointment to the United States Naval Academy in Annapolis, Maryland, in 1919 and graduated in 1923. After serving for five years in the battleship USS Arizona, he pursued postgraduate work in ordnance at the United States Naval Postgraduate School and then earned a master’s degree in chemical engineering from the University of Michigan in 1931. During the 1930s, Burke served in various capacities in a heavy cruiser and a destroyer before being given command of USS Mugford, which under Burke won the Destroyer Gunnery Trophy for 1939-1940.
At the outset of World War II, Burke was an inspector at the Naval Gun Factory in Washington. His repeated requests for sea duty went unheeded until he was given command in early 1943 of a destroyer division in the South Pacific. He soon gained a reputation for brilliance and innovation, especially after taking command that fall of Destroyer Squadron 23. Under Burke the squadron became known as “the Little Beavers” and fought in 22 separate actions in a four-month period, sinking or helping to sink 9 Japanese destroyers and downing some 30 of their airplanes. His exploits and his own nickname, “31-Knot Burke,” became widely known, and his performance in battle earned him an appointment in March 1944 as chief of staff to Vice Admiral Marc Mitscher in the famed Fast Carrier Task Force. According to the Dictionary of American Military Biography, in this post Burke “coordinated the operations of the largest naval striking force in history in the battles of the Philippine Sea, Leyte Gulf, and Okinawa.”
With the outbreak of the Korean War in 1950, Burke was sent to Japan to serve as deputy chief of staff to the commander of U.S. naval forces in the Far East. In 1951, he briefly served as commander of Cruiser Division Five before being designated a member of the United Nations Truce Delegation, which sought to negotiate an armistice in Korea. In late 1951, Burke was summoned to Washington for a two-year tour as director of the Navy’s Strategic Plans Division. In 1955, while still a rear admiral, he reached the pinnacle of his profession when President Eisenhower appointed him Chief of Naval Operations (CNO), promoting him ahead of nearly 100 more senior officers. During an unprecedented three terms as CNO, Burke sped up the construction of nuclear-powered submarines and initiated the Polaris Ballistic Missile Program.
Burke retired from the Navy in 1961 after nearly forty years of service. (He remained an influential figure and was at the forefront of efforts to establish the U.S. Navy Memorial in Washington, which was dedicated in 1987.) In 1977, Burke was awarded the Presidential Medal of Freedom. The Navy honored him by naming a new class of guided missile destroyers after him. On July 4, 1991, the first of these, USS Arleigh Burke (DDG-51), was commissioned in a ceremony attended by Burke and his wife Roberta.
When Burke died in 1996, he was hailed as a “sailor’s sailor” who defined what it meant to be a naval officer: “relentless in combat, resourceful in command, and revered by his crews.”
Posted by Editor at 11:22 AM